There is not a lot of mention of the past Sith Lords in the Star Wars main universe movies. We hear of Darth Sidious, Darth Tyranous (Dooku), Darth Maul, Darth Vader, and Darth Plagueis. Little did we know the extended universe would introduce to us some of the most amazing Sith Lords using Knights of the Old Republic games as its catalyst. Which take place thousands of years prior to the movies.

Darth Bane started off in the Cortosis mines of Apatros. Here, he went by a different name, his birth name Dessel, raised by an alcoholic, abusive father named Hurst who dies before the books timeline. Dessel is left with a very big debt that keeps growing due to the unfair work conditions of the mines owners. 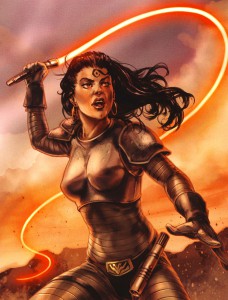 The story takes off from there through a series of twists and turns. Dessel makes enemies with Republic soldiers and officers through a very long and intense game of Sabaac where he wins the Sabaac Pot. He then becomes wanted and is given safe passage into the Sith army. He starts to attract attention to the Brotherhood of Darkness with his impossible military prowess and power. After committing mutiny to his superior, he is sent to Korriban to train with the masters.

The story then changes gears to view Bane’s life at the academy (his name changed after committing himself to the sith. Through much training he is one of the top students at the academy. He finds a small love interest, learns the power of the darkness through hatred, the Sith code, the power of manipulation and the power of revenge.  After alot of intense argumenets and fights, Bane is then alone finding his own way, and is working on re-creating the Sith by wiping out the current order, and starting fresh with the Rule of two. 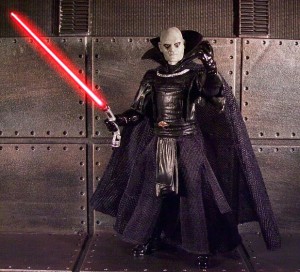 I have left out a lot of details, because I really want people to read this book. It is exceptionally dark, and has alot of twists and turns. It really was quite a ride and I got lost in the pages for hours. I enjoyed the character progression, the universe it was showing, the struggle between light and dark, and the other side of the Star Wars universe, the side where the good guys do not win.

If you have not read this book, please do, it is very fun and I cannot recommend it enough.