Rogue one features a new character named Chirrut Imwe (portrayed by Donnie Yen). He is a blind human male born from the moon of Jedha. He is a spiritual warrior-monk and was at one time, the guardian of the kaiber crystals for the jedi temple on Jedha. Chirrut is not a Jedi, but is a strong believer in the force and seems to be force sensitive as he is able to hit moving targets with his lightbow bowcaster, as well as dodge laser blasts. This could be in direct relation to him being blind and having heightened senses. He mutters a mantra that is now famous in the Star Wars universe “I’m one with the force; the force is with me.” 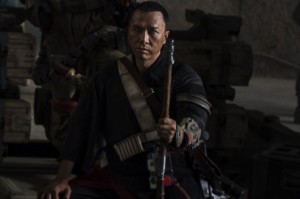 Donnie Yen was given creative input for Chirrut Imwe, in which he decided he would be blind, and he created a brand new style of martial arts fighting just for this character.

Chirrut Imwe is my favorite character in the Rogue One movie. He has a sense of humor, is played by my favorite Kung-Fu actor, and adds another level of spirituality to the movie. He knows what will happen on Scariff, and believes in the force to guide him.