Galaxy of Heroes is a mobile Game created by EA and is a turn based team battle with RPG elements such as upgrades, mods, levels, and recently, the additions of ships.

The game has made a big release this week, which, in my opinion, is one the biggest patches they have done, and is also a big turning point for fans of the Old Republic. In an update a few weeks ago, it was hinted we would get a new sith lord character in the game, it was then confirmed that Darth Nihlus (from the Star Wars Knights of the Old Republic 2, was going to be a character in the game. He was given his own 4 part even that added the Sith Trooper, and Sith Assassin to add to your collection. Please See Nihlus details below on what he can be leveled up too. 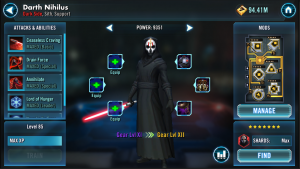 The patch also added new buffs to Sith Characters like Darth Maul, Count Dooku, Savage Opress, etc. All of these are detailed below. What is very import to me, is that they keep this game alive. It would be in their best interest to have a flood of new characters created and a few new raids. What do you think? Read the update and let me know. 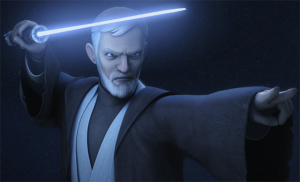 SHIPS •Fixed an issue where TIE Reaper was removing enemy Capital Ship Turn Meter even after he was defeated.
RAIDS •Enraged enemies during Raids now also gain 100% Accuracy and inflict a permanent Healing Immunity when they damage enemies with attacks, in addition to the greatly increased Offense they already received.

What’s Ahead
Our next update will focus on quality of life improvements in game. Stay tuned!